Tiffany has become a generic term for all lighting made with stained glass and art glass. Whilst these lamps and lights are not the work of Tiffany, they are termed ‘tiffany’ simply as a description which generally means a reproduction in the style of Tiffany. Reproduction Tiffany style lamps vary in price depending often on the quality of glass used and the time taken to craft the lamp. Tiffany style lights replicate the wonderful stylised flowers or dragonflies made famous by Tiffany and Mackintosh. Each piece is unique, not a copy but a new creation, in its own right. Subtle differences in the patterns and the way each piece of glass is soldered simply cannot be copied exactly. Tiffany reproductions can be thought of as antiques of the future. Tiffany lamps and light fittings are passed from one generation to the next; they are never or rarely replaced by modern lights or hidden from view. Tiffany style lights are suitable for older homes, period properties and modern new homes alike. 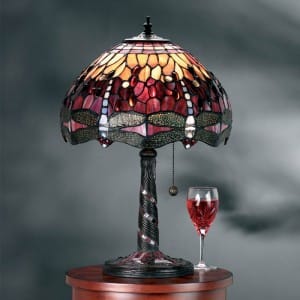 Tiffany style lights are often expensive because they are handmade and the more intricate designs involve time consuming detailed work. Tiffany style lighting is also made using expensive materials – coloured and textured stained art glass. The better the quality of glass the more expensive the lights can be. Some of the basic styles still require a lot of skilled workmanship as even plain colour lamps are often made from curved glass panels known as ‘bent glass.’ The base or stem of Tiffany style lights is often neglected in cheaper reproductions – if the budget allows choose tiled bases, or those with heavily grooved lily pad designs for a quality crafted look. Larger table lamps and standard lamps often have pull cords which dangle under the shade, much as you would expect to find on original lamps from the 1900’s. The presence of a pull cord on Tiffany style lamps does of course act as a separate on off switch. Sometimes two pull cords are visible to allow for two levels of switching – I guess a very early form of a dimmer.

Louis Comfort Tiffany, an American, was the son of the well know Charles Lewis Tiffany of Tiffany and Co, a very reputable store selling fine silverware and jewellery. Was this where his love of art began? He studied art and like all artists and creators had an interest in Art from around the world and was aware of the Arts and Crafts movement in England. Things were beginning to change and artists became more involved in the making and crafting of their own designs. Louis Comfort Tiffany was from a wealthy family which afforded him time to travel and learn his craft. He began as a painter and used strong vibrant colours and became the equivalent of an interior artist designing pottery, glass and fabrics. The Arts and Crafts style in Great Britain and notably William Morris influenced Tiffany’s approach to design and he collaborated with other artists until he began to work with glass. Glass panels and lamps became his enduring legacy. Tiffany lamps are highly prized and originals can be many thousands of pounds. Many of these lamps were not electric lights as we know them today. Electric lighting was a later bonus that maximised the effect of the beautiful coloured and stained glass whilst shielding the harshness of the electric bulbs to give a more pleasing lighting effect. Some of the most well know lamp designs would have featured dragonflies, wisteria, water lilies and lots of naturalistic flora and fauna. 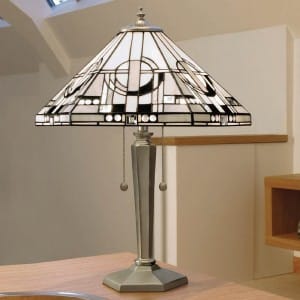 Art Nouveau with its continental influences emerged in 1880 through to the early 1900’s. Charles Rennie Mackintosh, so often associated with the Art Nouveau period, was the son of a police superintendent.  Born in Glasgow, Mackintosh became an architect and although his career was fairly established he was hugely influential in the style of Art Nouveau. He was regarded more highly abroad and exhibited in Vienna but was largely ignored at home save for the ‘Tea Rooms’ where his architectural decorative designs were very successful. Mackintosh collaborated with other artists and established a small group of Arty types known as ‘The Four’ – one of the four was to later become his wife. Their collaborations included her floral style designs and his linear designs. Mackintosh’s work is thought to have been influenced by Scottish patriotism and has strong Celtic symbolic lines. His furniture too has a linear almost ladder like style. This linear theme combined with the stylised rose is often the iconic design shown in stained glass windows and art glass lamps. The Mackintosh Rose is possibly the most recognisable design in table lamps and wall lamps and although is often called Tiffany it is more truly Mackintosh. Mackintosh was more highly regarded after his death and his work is now appreciated in his birthplace and throughout the UK.

What’s the difference between Art Deco and Art Nouveau?

There is always much debate about what is Art Deco and what is Art Nouveau. They are in fact different eras. Art Nouveau had largely run its course by the outbreak of World War I, while Art Deco was much later in the1920’s and 1930’s.

In terms of style both Deco and Nouveau have similarities. Art Deco was more industrial or architectural – think of how a child draws ‘sun rays’ bold and blocky. Deco did not have floral themes and in place of the pretty embellished and stylised flowers were strong shapes – think of the Chrysler and Hoover buildings in America, a whole host of traditional cinemas and even the Battersea Power Station! 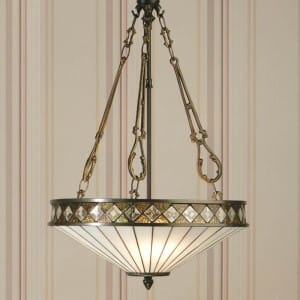 Art Deco was a time for celebrating industry -an optimistic almost decadent time between the two World Wars. Everything seemed new, there were planes, trains and automobiles, talking movies too. Cinema style lighting is a good example of the Art Deco style. Wall washer lights in glass or metal in the same bold deco shapes as the buildings were used to dress the interior walls of cinemas or picture houses and other public buildings. Holophane glass with chrome or silver detailing was popular. Women were often depicted in Art Deco artwork – the ‘spirit of ecstasy’ used as the bonnet ornament on Rolls Royce automobiles is a well known example. To decorate your home with lamps of the Deco period look for silver or bronzed female figures looking triumphant (women now had the vote) often depicted holding a ball. The1928 Olympic Games saw women taking part in the athletics and gymnastics for the first time. Everything seemed achievable and modern in the 1920 and 1930’s.

These are just some of the design details to look out for when buying light fittings in Art Deco, Art Nouveau or Arts and Craft styles. Many of us live in houses built in the 1920’s and 1930’s and the Lighting Company and its sister company Bespoke Lights are happy to share this information with you to help you choose the correct light fittings for your home. 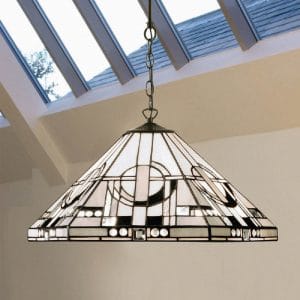 You may be interested to know that we now have a FREE magazine full of inspiring content and exclusive discounts! Sign up to our newsletter to receive your copies: